I only became interested in the climbing sport the summer after my first was born. After that I was hooked and climbed through my two other pregnancies.

I know there are plenty of contrasting opinions in the world on the subject of climbing while pregnant especially since many in society seem to become all the more opinionated when the topic pertains to others’ pregnancy or parenting. Rest assured I care deeply about my children and their safety as well as my own body’s health and those thoughts are always at the forefront of my mind. With that being said, it is my opinion that…

ROCK CLIMBING CAN BE THE PERFECT PREGNANCY ACTIVITY.

The type of climbing matters 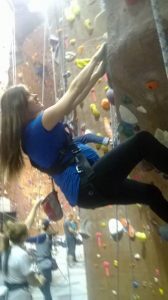 There are different types of climbing – lead climbing, top rope climbing, and bouldering. If you’re a climber than that’s not news to you. If you aren’t, than it ALL might seem dangerous, but its actually not. When lead climbing, you are connecting the rope to the wall as you climb and therefore may take a several-foot fall before being caught by the rope. When bouldering, you are climbing generally low to the ground without a rope, but may take a several-foot fall onto a pad on the ground. When top-rope climbing, the rope is already anchored at the top of the wall and therefore there is no risk of fall because it is pulling you up towards the anchor. However, when you need to rest or if you slip there is a stretching of the rope akin to that of you sitting down in a chair. Definitely not jarring and very slight. In fact, climbing rope is made to stretch a little so that it’s not jarring. Of course, just as you would do if you were not pregnant, only climb with a belayer that you trust and who is attentive. If I can put it into perspective for you, top-rope climbing is what children, even toddlers, do at fairs or carnivals. Pretty safe stuff.

Some women choose to keep leading or bouldering during their first trimester but simply select easier routes and grades to avoid serious falls. I have chosen to basically avoid all lead climbing and bouldering once pregnant for fear of something out of my control happening, such as a loose rock causing me to slip and fall. I exclusively top-rope climb while pregnant and have felt perfectly safe in doing so through two pregnancies.

You can burn tons of calories while rock climbing and it is great weight training and unlike many other sports that have these same fitness benefits, its low impact! It provides the cardio and strength exercise without strain on your bones and joints. That’s why it’s considered a lifetime sport that can be enjoyed by those in their later years as well.

The farther along in my pregnancy, the lower my grade gets. That’s just the truth. I was rocking top-roped 13s (indoor) during my first trimester this last pregnancy, but was stuck in the 11s and 10s at the end of my pregnancy. I don’t climb the same way when I’m pregnant, I don’t push my body the same way. Like I said before, I try to listen to what my body is telling me. When I’m climbing below my ability in this way, it honestly feels more like a stretching activity than anything else.

I need some type of exertion and some ME time while pregnant. Climbing has given me that. It’s relaxing. I haven’t been able to continue other sports in the same way. For this reason, I’ve climbed while full-term and just three days before going into labor and felt great doing so. I also felt so fantastic (remember your recovery is generally quicker for your later pregnancies – I’m not some kind of medical marvel) that I climbed maybe a week after that. It never caused any contractions or strains that other physical activities did for me.

If you want more than just my personal experience, a famous climber, Beth Rodden, created a survey with the help of two doctors that she knew. 339 pregnant climbing women responded to that survey. Some of the findings were published in an article in Rock and Ice, Climber’s Magazine in Sep 2017 (“What to Expect when Expecting – Rock Climbing While Pregnant” by Beth Rodden.) There has been a lot of talk about this article recently because it has very interesting findings. However, something that I wished it showed was the distribution of some of the answers and not just the average. At 20 weeks, most of the women in the study started to limit their climbing and most stopped completely at 31 weeks.  Were there any women who climbed to term, and if so, how many? I know that I did. That’s 1 person. Also, I would have liked to read what the description of ‘limiting’ their climbing entailed for these different women. There were only 6% who sustained some type of injury while climbing. Disappointingly, the study does not describe to us what type of injuries these may be. Climbing injuries vs. pregnancy injuries are vastly different. However, it does show basically none of these women having miscarried and those experiencing severe bleeding was also below the national average, though that could be because those having experienced such problems did not do the survey. In regards to climbing injuries, joints loosen during a women’s pregnancy in preparation for child birth and so this can be the likely culprit. Please be wary and do not overdo it. Joint and ligament strains can be a common climbing injury. You don’t want to have to recover from a climbing injury and childbirth at the same time! I injured a joint a few months ago climbing and I wasn’t even pregnant!  For these 339 women, it took an average of 3 1/2 months for them to return to climbing after having their baby. On a side note, I competed against a woman in a bouldering competition earlier this year who had an infant about 8-9 months old and she won first place! That’s right… she beat me, not to mention everyone else there too, and my youngest was maybe 18 months at the time. From the survey, 96% of the women breastfed and 7% of those saw a change in their milk volume when they returned to climbing.  I’m going to assume that meant a negative change, but the results do not actually specify. On that point, I noticed that the 1st place competitor that I mentioned nursed during the competition! Yeah, she was pretty awesome. It also reminded me of having to pump a few times while I was on a 22-pitch sport climb that I did with my husband 8 months post-partum. It was an awesome adventure. I was lucky to not have my milk supply negatively affected, lucky to have a grandma willing to babysit an infant for the day, and lucky that my baby was willing to drink milk from the bottle.

So ladies, every body is different. Listen to your own body and do what you love!

Use a pregnancy harness

How you feel will vary at each stage of the pregnancy. One rule of thumb for me while I’m pregnant is to listen to my body. That’s how I know how often to eat, what to eat, what not to do and what’s ok. I switch to a full-body harness when I feel like I should. If my normal harness isn’t comfortable then I should definitely be in the full-body harness. That usually happens for me about when I start my second trimester. I have used the Mountain Mama/Mad Rock harness for two pregnancies. Click here for a review of the product.

Talk to your OBGYN or not 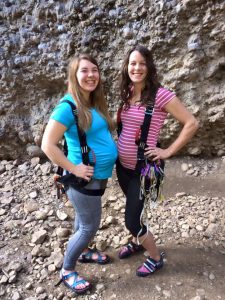 it is important to talk to your OBGYN and go to them with any questions or concerns that you have. I want to clarify that I am not claiming to know more than someone with years of specialized education and years of professional experience in that field. However, it appears to me that most OBGYNs have zero experience with climbing and therefore the above discussion on different types of climbing is completely lost on them.

With my second pregnancy, I remember attempting to discuss climbing with a nurse at my OBGYN in an attempt to get some type of verbal approval of the activity. There was none. She told me “absolutely not, under no circumstances, is any type of climbing ok while pregnant because there is risk of fall.” I tried to explain that there was no risk of fall with top-rope climbing but my explanation was lost on her. After that conversation I was a little emotional, which I blame on my pregnancy hormones, if I must admit.

My friend’s OBGYN, at the very same clinic, told her that she was cleared to top-rope climb as it was an activity her body was already use to do doing and carried no risk of fall.

Let me state it again:

ROCK CLIMBING CAN BE THE PERFECT PREGNANCY ACTIVITY.

If you’re wondering whether or not you can continue to climb now that your expecting or if there are any sports or exercises you can do as your tummy grows, consider rock climbing. You are not the first or only woman to have these questions and you won’t be the only one out there pregnant at the crag. There are more and more climbing mommas out there.

It has been the best low-impact exercise for me while pregnant. It helped me feel fit, stay healthy and relax. Staying in shape helped me emotionally and also helped my body bounce back quicker after pregnancy.

Rock climbing is an inherently dangerous sport. This site is not intended to teach you how to rock climb.